Now, until September 5, Planes of Fame is proud to display the P-51 "Mustang" that appears in the hit movie "Top Gun: Maverick." The aircraft is currently on display in our Maloney Hangar and visitors can view it up close and take pictures. 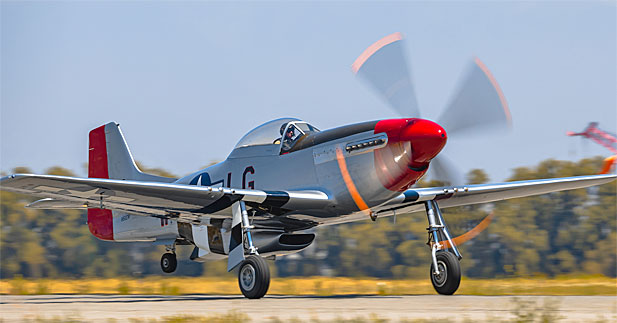 Owned and flown by legendary actor Tom Cruise, the aircraft was built in 1944 at the North American Aviation plant in Dallas, Texas. It was built as an F-6K – a photographic reconnaissance version of the P-51. It is one of 163 F-6K variants built and featured two Eastman Kodak K-24 cameras on board with the mission to fly over enemy territory to capture images of potential targets or battlefield damage.

The war service record of this aircraft (serial number 44-12840) is unknown but in 1946, it was being flown by the Civil Air Patrol. It then, as so many Mustangs did, went into private ownership and several restorations until it was acquired by Tom Cruise in 2001.

It currently bears the markings of the 334th Fighter Squadron of the 65th Fighter Wing, 4th Fighter Group that was based in England during World War II.

"Top-Gun: Maverick" is still breaking box office records since its Memorial Day release and has become a global phenomenon. The film, a sequel to the 1986 hit “Top Gun” once again finds U.S. Navy Captain Pete “Maverick” Mitchell back in the skies with thrilling aerial sequences, including several with this P-51 aircraft.

Check out this aircraft in action.

Follow these links to see the Mustang fly in this Lady Gaga music video and a sequence from The Late Late Show with James Corden.