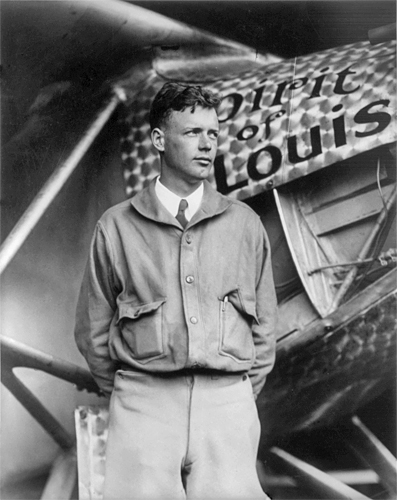 Since the earliest days of aviation, financial incentives in the form of “prizes” or competitions drove technological advances within the industry.  Newspapers, magazines, private benefactors and others offered cash and prestigious trophies for speed, distance, and endurance records.

These activities were suspended during the First World War, but in the decade that followed, many resumed.  The Orteig Prize was one of these.

Named after a French emigrant and New York hotelier named Raymond Orteig, it promised to pay $25,000 to the first person (or persons) to fly non-stop from New York to Paris (or Paris to New York).

In May 1927, a thirty-three and one-half hour flight of a lone pilot named Charles Lindbergh finally captured the prize and with it, the public’s imagination.

Lindbergh’s success certainly proved that aircraft could fly great distances without stopping, but more importantly, it ignited an awareness and interest in aviation that soon spanned the globe.

As a direct result of his success, aviation went from a novelty of barnstormers, aerobatic exhibitions, and racing competitions into a growing enterprise of mail and passenger service with ever advancing capabilities and reach.

Members of the Museum’s Education team will present a number of topics related to the first non-stop flight from New York to Paris.  Topics will include a look at several of the unsuccessful attempts, profile Charles Lindbergh and his “Spirit of St. Louis” aircraft, explore the reasons behind his success, and discuss the ramifications of this flight and its impact on the world.

Museum doors open at 9:00am. The Museum is open to the Public, General Admission is $15; for children 11 yrs and under, admission is $6. ages 4 and under are FREE! (excludes special events) FREE admission for Planes of Fame Members!