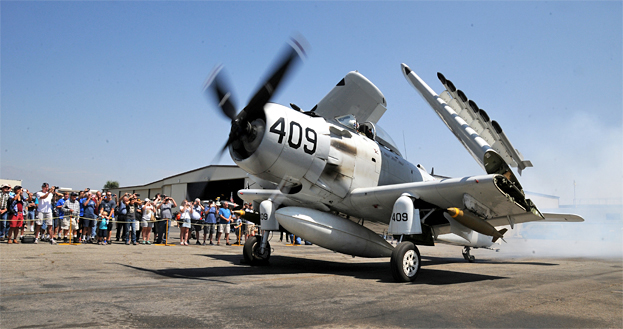 WHAT: Open to the public, Planes of Fame Air Museum (Chino, CA) presents its monthly Living History Flying Day on October 5, 2019, featuring the Douglas AD-4 Skyraider. A speaker panel of distinguished aviation experts, historians and veterans is featured, followed by a question & answer period and flight demonstration when possible. The Douglas AD-4 Skyraider will be on display and is scheduled to fly at 12pm. We will have the OV-1 Mowhawk, L-19 Bird Dog, T-28 Trojan and OV-10 Bronco on display.  At 12:00 noon, the Raffle Flight will occur. Become a member to enter the Raffle. All members are eligible to enter the Raffle, but you must be present to win.
UPDATE! - The OV-10 Bronco is also scheduled to fly at 12:00 noon.
Click on image to see the AD-4 in action:
WHEN: Saturday, October 5, 2019, 10am–12 noon: Speaker program & flight demonstration. Museum doors open at 9:00am.
WHERE: Planes of Fame Air Museum, 14998 Cal Aero Drive, Chino, CA 91710-9085 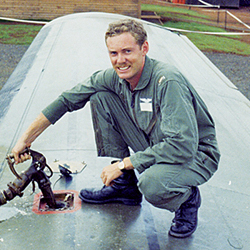 Bruce Cowee joined the Air Force ROTC in 1962 and was commissioned a Second Lieutenant in the USAF upon graduation from UC Berkeley on December 17, 1966. He attended the Air Force UPT (undergraduate pilot training), class 68e, at Williams AFB, Arizona, graduating and receiving pilot wings in February 1968. He was assigned to fly the C-7A Caribou and went to Caribou training school at Sewart AFB, Tennessee. Arrived at Cam Ranh Bay Air Base, Republic of Vietnam, in May 1968, assigned to the 458th tactical airlift squadron flying the C7A. He flew close to 900 hours of combat flying time and returned to Conus in May 1969. Assigned to fly theCc-141A at Travis AFB, California, attached to the 44th military airlift squadron. He separated from active duty in the Air Force on July 1, 1972.

He was hired as a pilot by Western Airlines on December 12, 1972. He flew various positions and aircraft while at Western, mostly on the Boeing 737 and Boeing 727s. On April 1, 1987, Delta air lines purchased western and in the ensuing merger, he began to fly for Delta, retiring on June 1, 2004 while flying as a captain on the Boeing 757/767, based in Los Angeles. His flying career began with Vietnam in 1968 and ended with 9/11 and its aftermath when he retired in 2004.

Cowee authored the book “Vietnam to Western Airlines”, a product of flying with so many Vietnam veterans over the years and wanting to preserve the history and pay tribute to their service. 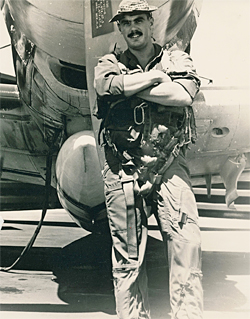 States Air Force, Laughlin AFB, Texas in 1969 where he was a Distinguished Graduate. Soon after, he became a Second Lt. pilot in the A-1 Skyraider and OV-10 at the Forward Air Controller School, Hurlburt Field, Florida.  In 1970-1971, Col. Goldenbaum was a combat fighter pilot in the Viet Nam war in Nakhon Phanom, Thailand racking up 608 hours of combat time in the A-1 Skyraider and Forward Air Controller, OV-10. His commendations include: Distinguished Flying Cross, 11 Air Medals, Viet Nam Cross of Gallantry, Meritorious Service Medal, Air Force Commendation Medal.  He continued active duty service in the USAF during 1971-1988.  During that time, he was promoted early to Lt. Colonel and Colonel. Jon commanded an F-15 Fighter Squadron and served in a variety of command positions.  He actively flew and instructed in the following aircraft: A-1 Skyraider, OV-10 Bronco, T-38, T-39, F-111, F-5E, F-15, serving worldwide in Asia and Europe.  After early promotion to Colonel, Jon decided to leave active duty.

In 1988-1998, he became pilot and Instructor, Delta Air Lines, Atlanta, GA.  Flew Boeing 727,737,757, Lockheed L-1011, and McDonnell Douglas MD-11. Since 1990, Jon has been President, Consolidated Aircraft Coatings, Riverside, CA manufacturer of FAA approved covering systems, paints and primers for aviation. Over 25 years working with FAA and other Government regulatory agencies. He is also Trustee Chairman of the Tom Wathen Center, Flabob Airport, Riverside, CA. a non-profit charity dedicated to bringing challenged young people into aviation careers.  Founded a youth opportunity program that has become a benchmark of gang intervention. As chairman, he has turned Flabob airport into a campus for education in aviation.