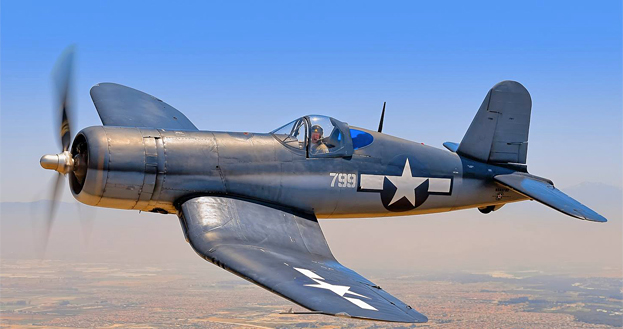 WHAT: Open to the public, Planes of Fame Air Museum (Chino, CA) presents its monthly Living History Flying Day on March 2, 2019, featuring the Vought F4U-1A Corsair. A speaker panel of distinguished aviation experts, historians and veterans is featured, followed by a question & answer period and flight demonstration when possible. The F4U-1A Corsair will be on display and perform a flight demonstration (subject to change). At 12:00 noon, the Raffle Flight will occur. Become a member to enter the Raffle. All members are eligible to enter the Raffle, but you must be present to win.
Click on image to see Corsair in action: 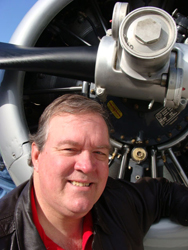 He is the author of ‘Confessions of a Guide Dog – The Blonde Leading the Blind.’ The book has won three national awards and been reviewed in three magazines. His second book ‘Flying on Film – A Century of Aviation in the Movies 1912 - 2012’ won two awards and been reviews in six national magazines. His most recent book, “The Marines’ Lost Squadron - The Odyssey of VMF-422” has received praise from some of the nation’s most respected military historians.

A contributing writer for over a dozen national magazines, his articles run the gamut of topics from aviation, military history, classic film and television, dogs, humor and essays. He started by writing stories about his first Guide Dog, Musket and later, about his work at the San Diego Air & Space Museum. This led to having more than two hundred articles published in major aviation and military history magazines and then to his books.

Legally blind, Carlson travels and works with his second Guide Dog, Saffron, a female Yellow Labrador.
He is a Past president of Poway-Black Mountain Toastmasters and helped to achieve the Presidential Distinguished Club Award and earned CL and Advanced Communicator Silver Awards. Carlson established FUNspeakable in 2009 and has done lectures for several local organizations, adult communities and schools. His popular topics run from maritime and aviation history to great engineering works, from the ancient past to the future of space exploration, from humor to critical essays, and from the Civil War to World War II. 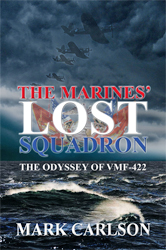 Colonel Walter J Boyne, USAF, (Retired), world-renowned author and historian, former curator of the National Air & Space Museum, Washington DC gives the forward to this book: “Mark Carlson does it again, this time with a fast-moving revelation of a forgotten Second World War tragedy, one that should be remembered by all! His research is beyond par.”

In January 1944 a new Marine fighter squadron was preparing for their role in the largest amphibious and air assault on Japanese forces in the Pacific. But instead of facing a human enemy these eager Marine pilots found themselves confronted with an even more implacable and deadly foe: a Pacific typhoon. Twenty-three young men took off on a routine ferry flight, but only two-thirds of them survived. It was the worst non-combat loss of a Marine squadron in history. The disaster was covered up by the Navy and has remained largely forgotten. Now, after three years of careful research into official documents, dozens of interviews and painstaking investigation Mark Carlson, the author of the new book “The Marines’ Lost Squadron” tells the whole\compelling story and reveals one of the last dark secrets of World War Two.

Other reviewers say, “Excellent! A Compelling read.” “You won’t want to put it down.” “A masterpiece of writing.”

The author will sell and autograph books at this event. Cash or checks, please.

Strap into the cockpit for an inspirational story about duty, honor, and courage.

Pappy Boyington Field tells the story of the grass-roots effort to honor a WWII Hero
in the town of his birth. The film follows members of the community who battled against bureaucracy, and weaves in their stories during the airfield naming campaign. Gregory "Pappy" Boyington flew the F4U Corsair in WWII as the leader of the VMF-214 Black Sheep, and he was awarded the Medal of Honor.

This documentary film was Written, Produced, Directed, and Filmed by Kevin Gonzalez. He served a four-year enlistment in the U. S. Marine Corps, and then graduated from the University of Southern California. Kevin will provide a presentation during the event and then we will show the film in its entirety in the Movie Theater at 12:45pm. The documentary is 65 minutes and the Filmmaker will be present for an audience Question & Answer after the showing. www.PappyBoyingtonField.com

Movie Theater seating is limited to 50 people and is on a first-come, first-served basis. There will be a second screening if necessary at 2:00 pm.

Kevin Thompson, historian and modeler, will provide an in depth presentation about the F4U Corsair.