The history of aviation is as much a woman’s story as it is a man’s. In the earliest days, a number of brave and determined pioneers quickly disproved the widely held belief that, “women could not operate a complex machine like an airplane.” Other trailblazing women who followed won races, set records, and made sacrifices to open the doors of the industry to subsequent generations of women. Today, women work in every aspect of the aviation and aerospace fields. This presentation will profile many of the early aviatrix and examine the opportunities for women in the industry today.

WHAT:  Planes of Fame Air Museum (Chino, CA) presents a special event entitled, “Women in Aviation: Early Pioneers to Today.”  This event will expand upon last year’s look at the role women played during World War II by examining the contributions of early female aviation pioneers. Discussion will also explore the many opportunities for women today through first-hand accounts.

The Museum is open to the Public, General Admission is $15; for children 11 yrs and under, admission is $6. ages 4 and under are FREE! (excludes special events) FREE admission for Planes of Fame Members! Click here to become a Member!

Jill R. Meyers has over 30 years of experience in the fields of aviation and aerospace. Her passion for aviation started as a teenager when she obtained her Private Pilot License at age 17. Her career started in the U.S. Air Force, where she operated and maintained ground radar and data communication systems worldwide for eight years.

After transitioning to civilian life, Jill held key positions at companies including Boeing, Raytheon, Northrop Grumman and Eclipse Aviation. Platforms she has supported include the Airborne Warning and Control System (AWACS) surveillance aircraft for the U.S., U.K. and NATO fleets; the Global Hawk Unmanned Aerial Vehicle (UAV); Air Force One; the Eclipse 500 jet; and the F-35 Lightning II Joint Strike Fighter. In 2018, Jill started an aviation management consulting business to provide management and engineering consulting services to commercial/business aviation organizations around the globe.

Jill holds a Bachelor of Science degree in Aerospace (Astronautical) Engineering from the University of Texas at Austin and has completed graduate courses from Embry-Riddle Aeronautical University. She is a long-time member of the Society of Women Engineers (SWE), the American Institute of Aeronautics & Astronautics (AIAA) and Women in Aviation International (WAI), where she is President of the WAI San Diego Chapter. Jill has been a public speaker on Commercial Unmanned Aerial Systems, Aerospace Engineering and Women in Aviation & Aerospace. She currently volunteers for Dreams Soar, Inc., a nonprofit organization inspiring girls and young women to pursue Science, Technology, Engineering and Math (STEM) education and Aviation careers. 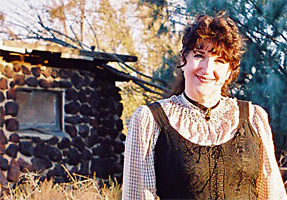 When Patrice Demory was 18, a mutual friend working at Edwards Air Force Base told Patrice that the legendary Florence “Pancho” Barnes needed help on her ranch.  Not knowing who Pancho Barnes was at the time, she jumped at the opportunity.  And so in 1966, Patrice had the distinct opportunity to live with Pancho at her Gypsy Springs ranch in the Mojave Desert (aka, “the middle of nowhere”). It was the beginning of an incredible adventure!

It turned out that both Patrice and Pancho grew up in the San Gabriel Valley – though at far ends of the economic spectrum.  More than just sharing home turf, they shared many interests, horseback riding, shooting and flying.  This gave them some common ground on which to build a rapport.  Patrice became Pancho’s traveling companion, household helper, and interestingly, even assisted in writing Pancho's autobiography.

Patrice will regale visitors to the Women in Aviation event with tales of her adventures of living with Pancho, which was like living in the wild wild West!  She will also share some insight into the real person Pancho was in the privacy of her home.

Joining these presenters will be a panel of women in the aviation field, including educators, a former commercial airline pilot, two current Naval aviators, and others.

Also on the program are representatives from the Mt. San Antonio College Aeronautics department, Women in Aviation chapter.  They will discuss the programs at Mt. SAC that prepare students for a variety of

Mt. SAC owns and operates seven aircraft which are based at nearby Brackett Airport.

Special Screening in the Museum Theater

After the event, we will be screening the 2009 documentary, “The Legend of Pancho Barnes and the Happy Bottom Riding Club.”  This hour-long award-winning film explores the life of Florence “Pancho” Barnes through film clips, stills and interviews with the men and women who knew Pancho best.  A fascinating look at one of aviation’s most charismatic figures.

Seating is limited to the first 50 people.