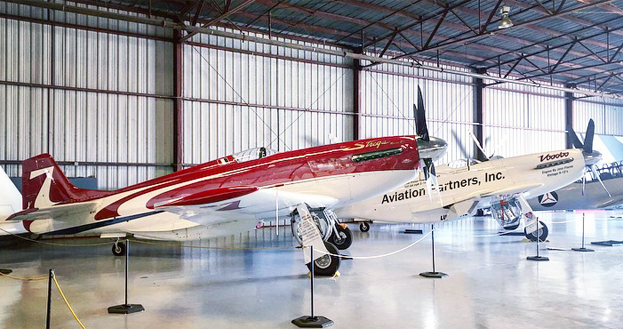 Visit Planes of Fame Air Museum and see two of the Fastest Unlimited Air Racers on the Planet!  (limited time only) P-51 Strega is temporarily on display in the Pond Hangar, right next to P-51 Voodoo! Come see both of these famed racers together side by side!  Whenever a piston powered unlimited air racer starts its engine, the ground trembles in respect. These aircraft have been flown by the best pilots in the world. Record holders include men like Jimmy Doolittle, Lyle Shelton, and Steve Hinton.  Then, on September 02, 2018 in the skies above Idaho, champion air race pilot, Steven Hinton, pushed his modified P-51 Mustang, Voodoo, to a new speed record of 531 miles (854.56 km) per hour, a truly amazing feat!  Racers like Voodoo grace the annals of aviation history. Each hard-won victory has led to advances in aircraft engineering. Stories of these men and their phenomenal aircraft are enough to stir the imagination of enthusiasts from eight to eighty.  Reading about planes like Voodoo is great but seeing them up close will cause your heart to soar.

Come to Planes of Fame in Chino, California and see two of the fastest P-51 unlimited air racers on the planet: Voodoo, and Strega. Planes of Fame is the air museum ‘Where Aviation History Takes Flight’.