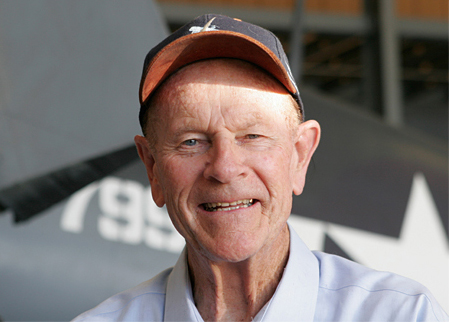 On May 21, 1927, Charles Lindbergh, after thirty-three and one-half hours in the air, carefully guided his aircraft, the Spirit of St. Louis, to touch down on Le Bourget Field in Paris, France. It was a momentous occasion that would forever change the world and the role that aviation would play in it.

The date was significant, for exactly one year later, on May 21, 1928, Edward T. Maloney was born in Pomona, California. His too was to be a life destined to forever change the world of aviation.

By the time he was ten, the aviation bug had bitten Ed. While other kids were trading baseball cards and memorizing batting averages, he was clipping pictures of airplanes and learning about the famous pilots of the era. It was the Golden Age of aviation – and soon Ed was building detailed wooden scale models of his favorite airplanes, a passion that would continue throughout his life.

When World War II erupted in Europe, Ed was in Junior High School in Pomona, California. He was consumed by the news of the war. With America’s entry in December 1941, he soon became the ‘resident expert’ among his classmates concerning military aviation. In High School, his favorite subject was history. Ed joined the Civil Air Patrol and was a skilled plane spotter.

The scrapping of warbirds at the close of the Second World War affected Ed deeply. “I was a senior in High School, and I used to drive down to the Cal-Aero Field where they were storing thousands of the old warbirds,” he recalled. “I remember watching this 18-foot steel plate drop from a crane. It would snap a B-17 or B-24 in half just as if they were toys. It was almost sickening to watch.”

He saw house-sized mounds of aircraft technical manuals being burned. One of the workers told Ed that he was welcome to all he could carry. Ed made quite a few trips to save as many books as he could.

It was at this moment in young Ed Maloney’s life that he became a preservationist. This idea of rescuing the past formed a new idea in Ed’s mind – he would do all that he could to save as many aircraft as possible.

“I didn’t have much money at the time,” he explained. “But I would scrape together enough to buy an old warbird and store it. Sometimes I would buy one and trade it for something else. Soon I had a nice collection of notable aircraft.”

In 1957, Ed would take the initial ten aircraft that he collected and present them to the public with the opening of an aircraft museum. It would be the first aviation museum in the western United States. He would continue to buy, trade, and acquire aircraft for the rest of his life. Today, his collection efforts are at the heart of the Planes of Fame Air Museum. Still other aircraft rescued by Ed can be found in aviation museums around the world.

Ed Maloney was truly a renaissance man. He was an accomplished historian and successful author. He would author fifteen books – all on aviation subjects, and today, many remain among the primary reference works of contemporary historians.

He would become an advocate, helping to lobby Congress to introduce legislation that would better protect museums and the acquisition of historical artifacts. He was a humanitarian, using history and the lessons it imparts to help people better understand their past and forge futures that are more meaningful. He was a husband and a father, and from the beginning, Planes of Fame Air Museum would be a family venture.

But most of all, Ed Maloney was simply a fan of all things aviation. “I grew up on the stories of the pioneers of aviation, the aces of the Great War and the brave pilots of the Golden Age,” he once said. “I witnessed from afar the exploits of World War II and Korean aces and was later fortunate to call many of these men friends. It was my hope to preserve these aircraft and fly them to create something that future generations would enjoy and appreciate. It has been my pleasure to see what Planes of Fame has become.”

Ed Maloney came into this world on the first anniversary of Lindbergh’s historic flight. He left us on the 145th anniversary of Orville Wright’s birth, August 19, 2016. There is almost a sense of cosmic poetry to this. For in the United States, August 19 is forever acknowledged as National Aviation Day.