The story of the Planes of Fame Air Museum is the story of one man’s vision.

Ed Maloney knew that protecting our aviation history was important. At a time when very few shared his foresight, he understood the need to preserve, inspire, educate, and honor the legacy of what was then an industry less than half a century old.

Today, his vision is reflected in the extensive collection of the Planes of Fame Air Museum, comprising aircraft and artifacts that might have been lost forever. His vision lives in the roar and thunder of rare warbirds flying overhead to the delight of millions. Moreover, his vision perseveres through the efforts of our volunteers and staff to make the experience of each visitor to the Museum unique and memorable.

It begins with our mission.

The mission of the Planes of Fame Air Museum is to preserve aviation history, inspire an interest in aviation, educate the public, and honor aviation pioneers and veterans.

On the surface, the mission is simple and straightforward. Four cornerstones – preserve, inspire, educate and honor – form the basis of everything we do.

Our efforts at preservation have assembled one of the most extensive collections of rare and historic aircraft in the world. We take this a step further by restoring many of these aircraft to flight. These meticulous restorations have saved some of history’s most precious aircraft. Putting them back in the sky allows new generations to appreciate our vast aviation heritage. These efforts continue on a daily basis at the Museum.

Inspiration takes many forms. Our annual Airshow lets thousands see and hear historic warbirds, vintage aircraft, and aerobatic performers take to the skies. Our Aviation Discovery Center provides hands-on experiences that help Museum visitors gain appreciation for the wonder of flight. Through endeavors such as our Youth Programs, Student Art Contest and our College Scholarships, our goal is to kindle an interest with young people to the enticing field of aviation.

From guided tours, school field trips, and our stimulating monthly Living History presentations, the educational efforts of the Museum play an essential part of our ongoing activities. In order to better tell important stories from aviation’s rich history, we’re integrating many of our Museum displays and graphic support with new levels of interactivity. Our Research Library and Model Room are knowledge centers dedicated to assisting in scholarly endeavors.

We recognize that the intellectual and physical contributions of the men and women who built this industry, and the veterans who advanced it through their service and sacrifices, are worthy of honor. The Museum presents its annual “Achievement in Aviation” award to individuals who exemplify the highest standards in aviation. Each month, our Kilroy Coffee Klatch says a simple “thanks” to veterans past and present. Our 475th Fighter Group tribute, the Wright Flyer display, and the developing Korean War Memorial, further honor major contributions to aviation’s legacy.

It has been this way since the very beginning. 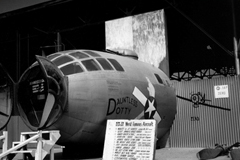 After nearly a decade of wheeling and dealing to collect his first ten aircraft, Ed Maloney opened the Museum on January 12, 1957.

The site was a former lumber yard in Claremont, California. The sign out front read simply, “The Air Museum.” There was no need to be more specific. At the time, no other air museums existed west of the Mississippi River.

Ed continued to grow the Museum, acquiring new aircraft, aviation artifacts, and memorabilia. By 1962, the Claremont facility had run out of space. At this same time, a new idea began to take shape – why not restore some aircraft to flight? To achieve this would require an airport-based location. 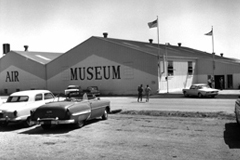 In June 1963, the Air Museum relocated to Ontario Airport in Ontario, California. Occupying two hangars, the Museum now had a home large enough to display the collection and room to conduct restoration work.

A few years later, in 1970, a unique opportunity surfaced. The non-flying, static aircraft moved to Buena Park, California to become part of the “Movie World: Cars of the Stars and Planes of Fame Museum.” Housed in two large buildings on Orangethorpe Avenue, the Southern California attraction remained open until 1973. 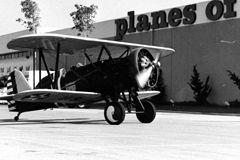 With the closure of Movie World, the next chapter in the Museum’s history saw yet another relocation. The Chino Airport, located on the border of the cities of Chino and Ontario, California, was an ideal location for the display of the ever-expanding collection, provided room for the important restoration work, and offered plenty of airspace for flying demonstrations. 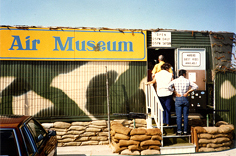 Over the next forty-plus years, the Museum would continue to flourish. New additions to the collection continued. Restoration work put several rare and unique aircraft back into the sky, including the Mitsubishi A6M5 Zero, the Boeing P-26 Peashooter, and the Northrop N9MB Flying Wing. The annual Airshow commenced, thrilling the public with the sights and sounds of bygone eras. Film and television work, and several air racing victories by staff and volunteers brought added notoriety to the Museum.

By 1995, with the collection growing ever larger, particularly the number of flying aircraft, a second facility was opened near the southern rim of the Grand Canyon in Valle, Arizona.  This facility would remain open until the Covid-19 pandemic of 2020, when it was closed to the public and converted into a facility focused on aircraft restoration.

Chino remains the base of operations for the Museum. Seven hangars house the collection with several additional buildings including the Aviation Discovery Center, the Research Library, the Model Room, and a small theater. Altogether, including structures and outside tarmac displays, the Chino location comprises a 14-acre campus. The collection now numbers close to 160 aircraft, and nearly a quarter of these fly regularly.

In 2022, the Museum signed a lease agreement at the Santa Maria Airport in Santa Maria, California.  Groundbreaking began in 2023 on a multi-phase project that will create a substantial presence for the Museum on 23 acres at this historic airport.  Phase One is expected to be completed 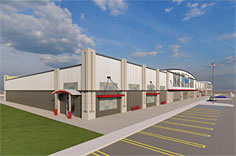 The Santa Maria expansion will allow the Museum to put more aircraft on public display with two large Museum campuses – one in southern California and the other on the central coast of California.

With our mission to guide us, and Ed’s vision to lead the way, the Museum flies on into a very bright future. 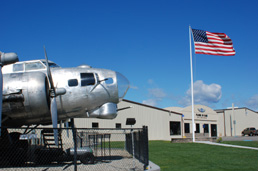