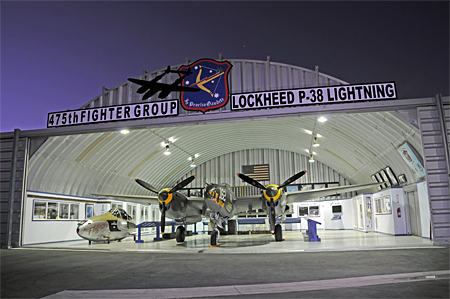 They were bold and brave. Young men thousands of miles from home. But they were well trained and prepared for the task at hand. When their time came to enter the fight, they achieved phenomenal success.

The story of the 475th Fighter Group during World War II is the stuff of legend. Fighting in the steaming hot and disease-infested jungles of New Guinea, and later in the tropical climes of the Philippine Islands, the three squadrons (431st, 432nd, 433rd) of the 475th accumulated one of the most successful victory records of the Pacific War. Along the way, there was triumph and tragedy.

Told through graphics, videos, and artifacts from the men of the Fighter Group, their inspirational and accomplished stories are collected in the 475th Fighter Group hangar at the Museum. This hangar is also home to “23 Skidoo,” the Museum’s Lockheed P-38J Lightning, one of only a handful of flying P-38 aircraft.