Help Us Restore this Combat Veteran to Flight 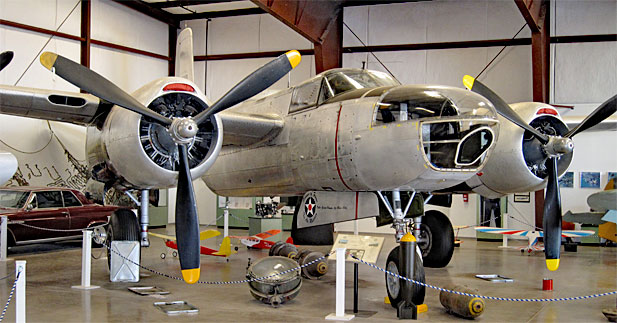 The Douglas A-26 “Invader” served with distinction in three major wars and several other skirmishes since it first took to the air in 1942.  A total of 2,503 aircraft were built from 1943 until 1945.  Today, less than 100 airframes remain, and only 16 of these are flight worthy.

We’re moving forward with an exciting return-to-flight project to add another A-26 back to the flying ranks so that everyone can enjoy the sights and sounds of this aircraft and appreciate the important service it gave America and our allies. The Museum’s Douglas A-26C aircraft is currently under restoration at our Arizona facility. We can use your help to get her back in the sky.

The Douglas A-26 was a light bomber first developed in 1942 for the Army Air Force. The prototype took to the skies in July of that year and production units entered combat in 1943. Built in two primary variants – the A-26B which featured up to eight 50-inch machine guns, most located in the nose of the aircraft and the A-26C which featured a glass nose for installation of a Norden bomb sight for more accurate bombing runs. Both variants could carry a bomb load of up to 6,000 lbs, the same as that of a typical B-17 heavy bomber.

The A-26 served in all theaters of World War II as both a fast, low-level bomber, medium altitude precision bomber, and in a support role for ground troops in the combat zone. They continued in service after the war and when the Korean War broke out in 1950, the aircraft was renamed the B-26 and served the same duties during that conflict. Even in the early stages of the Vietnam War, modified B-26 aircraft were flying counterinsurgency and covert missions. During the 1970s, many B-26 aircraft were used as firefighting aircraft, dropping water and fire suppressants over forest and brush fires.

Our aircraft was completed as an A-26C in March 1945 and shipped immediately to the European theater of World War II. Before she saw any active service, the war in Europe ended and she returned to the United States. When the Korean War started, she was converted into a reconnaissance aircraft and was designated an RB-26C (Reconnaissance-Bomber 26C). From 1950 until 1953 she flew countless reconnaissance missions for the U.S. Air Force over North Korea, serving to scout potential targets or photograph the effects of prior bombing missions.

After the war, the Museum’s aircraft was sold into private ownership and converted into a “fire-bomber.” She fought fires in the Northwest United States, Canada, and Alaska. In 1980, she was donated to the Planes of Fame Air Museum and has been on static display since.

The Return to Flight of the Museum’s A-26C

To honor the men and women who wear our military uniforms, we’re renaming this aircraft “Miss Victory.” She’ll serve as a flying tribute to the men and women who served in our armed forces during the Second World War, Korea, and Vietnam. Her return to flight will add an exciting dimension to the Museum’s fleet of flyers – she carries two powerful Pratt & Whitney R-2800 engines on her wings which will give her the speed and power to impress visitors at the Museum’s flying events and airshows.

We Need Your Help

We’re several thousand dollars short of our goal to get “Miss Victory” back into the sky. We need your help through a tax deductible donation to help us complete this project and return this veteran to flight. Please consider a donation today.