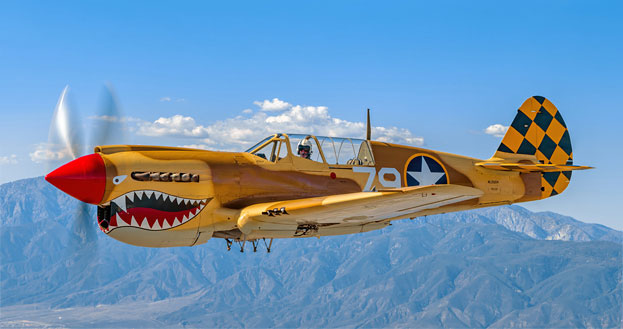 During WW2, the P-40 was the third most-produced fighter. In three major combat theaters, the Pacific, China and North Africa, the P-40 established itself as a superiority fighter in ground attack. The P-40 is most widely known as the aircraft of the Flying Tigers, aka the American Volunteer Group (AVG), who began fighting the Japanese in China during the early days of the Pacific war. The P-40 was not as maneuverable as the aircraft types flown by the Japanese.

The Museum’s P-40 is a World War II Combat Veteran and served with the Royal Canadian Air Force. It flies regularly and has appeared in the films “Pearl Harbor” and “Valkyrie.” It is painted in the markings of the 325th Fighter Group.