Military vehicles provide another interesting dimension to the Planes of Fame Air Museum collection. Consisting of several vehicles from the World War II era, these vehicles are used in public events including parades and military reenactments.

Many have been restored here at the Museum and all are maintained by a dedicated team of volunteers. Among the current collection are the following: 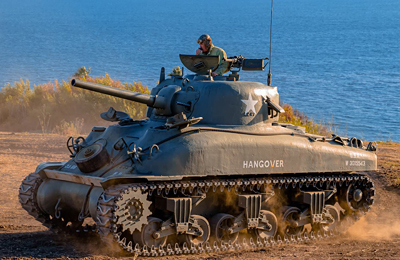 The M4A1 Sherman Tank is a medium tank from World War II. Our Sherman is an early model Sherman tank, built in 1942. Our M4A1 was based in the United States during the war and was used for training. Acquired in the mid-sixties, our Sherman Tank has been used in movies, commercials, reenactments, parades and other public displays.

Our 1941 WC-54 Dodge Ambulance is a fully operational Dodge Ambulance. It was restored in 2004 by Museum volunteers. It is on the schedule for another round of restoration improvements in the near future. 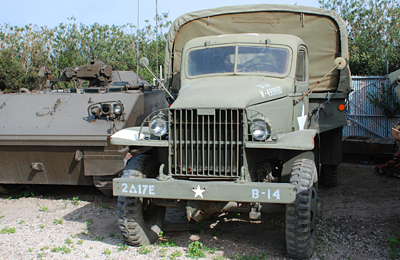 The GMC CCKW, also referred to as the Deuce and a half, was used to transport troops and supplies during World War II and later during the Korean War. The Museum’s CCKW is a 1941, closed cab long-wheel-base (LWB), originally built in a block of trucks shipped without a bed. Trucks were shipped from GMC with cargo and dump beds, which means our CCKW was destined for a specialized bed. The CCKW is operational and still serving its original purpose by hauling materials to setup and being displayed for our annual airshow.