In order to book a USAF Heritage Flight demonstration using Planes of Fame Air Museum’s warbirds including the F-86 Sabre, P-40 Warhawk, P-38 Lightning or P-51 Mustangs, at your next airshow please contact our Chief Pilot for rates. 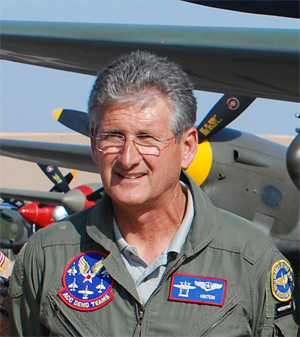 Steve Hinton lives in Newport Beach, California with his wife, Karen. They have two children Steven and Amanda.  Amanda is in the military studying to be a medical doctor. Steven (Steve's son) being a 7-time Unlimited Gold Air Racing Champion at Reno, Nevada, the youngest pilot to ever hold that title, and current holder of the the World Speed Record for a piston engine aircraft.  Steve has a two-year degree in Commercial Aviation from Mt. San Antonio College. He has been president of Planes of Fame Air Museum since 1994 and a board member since 1971.

He is the owner of Fighter Rebuilders, established in 1980. Fighter Rebuilders consults, restores, and flies fighter and bomber aircraft for collectors as well as museums in the U.S. and Great Britain. They have completed over 40 major warbird restorations.

Steve is also a member of the Screen Actors Guild and the Motion Picture Pilots Association. He has been a motion picture pilot since 1977 working as both a pilot or coordinator for filming of television and motion pictures. In 1975 he became an Unlimited Air Racer at the National Air Races accumulating six Unlimited Class victories, including the 1978 National Champion in the “Red Baron” and the 1985 National Champion in “Super Corsair”. He held a world speed record from 1979-1989 at 499 mph in the “Red Baron” RB-51 at Tonopah, NV on Aug 14, 1979 and retired from racing in 1990. 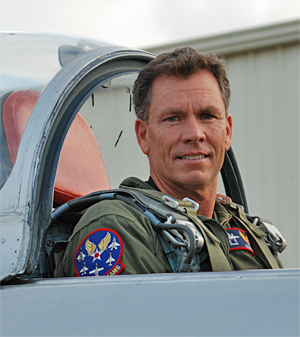 Kevin Eldridge was born in Riverside, California and now resides in Claremont with his wife Andrea who is also a pilot. His interest in aviation started when he was introduced to the Planes of Fame Air Museum while in high school. In 1979, he started working as a mechanic restoring World War II aircraft for the Museum and the following year for Steve Hinton's Fighter Rebuilders. After obtaining his private pilot certificate, he continued to fly earning his commercial privileges in a North American T-6 and instrument in the North American B-25 Mitchell. Also during this time he graduated with a B.S. in Finance from Cal Poly Pomona.

Kevin has been flying warbirds for over 20 years and holds an unlimited license for "all makes and types" of high performance piston powered aircraft. He is a Screen Actors Guild member, has raced in the Unlimited division of the National Air Races in Reno, Nevada, and has flown a wide variety of warbirds and aircraft that range from the Luscombe to the F-86 Sabre. He is also a member of the USAF Heritage Flight airshow demonstration team with a low level aerobatic card in the P-40 Warhawk, P-51 Mustang, P-38 Lightning, F-86 Sabre, and T-33 Silver Star.

Kevin currently holds the position of Chief Pilot at the Planes of Fame Air Museum, is still involved restoring vintage and warbird aircraft (recently completing a 1947 Luscombe for his wife), and is based in Los Angeles where he flies the MD 80 for a major airline.