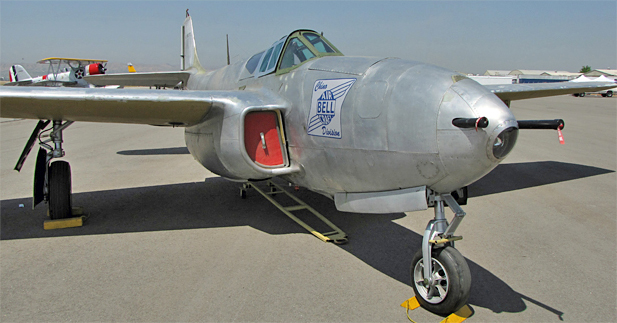 The P-59 was the first jet-powered aircraft in the U.S. Jet engine development had been proceeding in Germany since the mid-1930s. The Allies recognized that they needed to catch up quickly in this important technology.

In April 1941 General Hap Arnold, then chief of the U.S. Army Air Corps, had visited England's top secret jet development facility, where the Whittle centrifugal design engine was under development. Upon returning to the United States, Arnold contacted General Electric about building the Whittle engine under license. Bell Aircraft was selected as the airframe manufacturer.

The first aircraft, the XP-59, was completed in August 1942, with the first flight taking place at Muroc dry lake bed (later Edwards AFB) on October 2, 1942, and piloted by Bell test pilot Bob Stanley. A total of three XP-59s were built.

On 26 March 1942, Bell was awarded a contract for 13 service test YP-59 airplanes, which were fitted with upgraded engines. These were followed by the YP-59A, which had minor modifications to the airframe. The program was canceled in March 1945, with a total of 66 P-59s of all types produced. The P-59 was never used in combat; the distinction of first U.S. combat jet would go to the Lockheed P-80 Shooting Star.

There are six surviving P-59s. The museum's aircraft was acquired from the California Polytechnic University of San Luis Obispo in the mid-1950s.

Upon completion, it will be the only airworthy and flyable P-59 in the world.