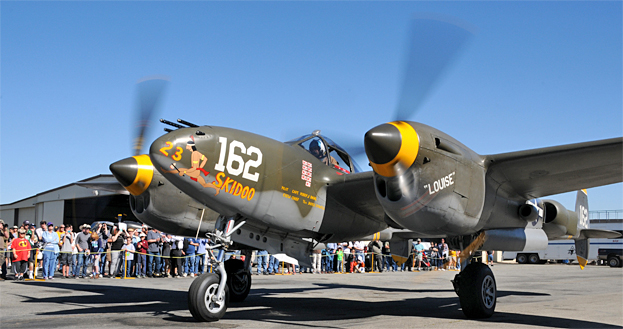 WHAT: Open to the public, Planes of Fame Air Museum (Chino, CA) presents its monthly Living History Flying Day on March 7, 2020, featuring the Lockheed P-38 Lightning. There is a presentation by Francis Gary Powers, Jr. is the son of Francis Gary Powers (an American pilot whose Central Intelligence Agency (CIA) U-2 spy plane was shot down while flying a reconnaissance mission over the Soviet Union in 1962, causing the famed U-2 incident). Also, Join us for The 3rd annual Planes of Fame Volunteer Maloney Model Contest. This will be followed by a question & answer period and flight demonstration when possible. The Lockheed P-38 Lightning will be on display and perform a flight demonstration (subject to change). At 12:00 noon, the Raffle Flight will occur. Become a member to enter the Raffle. All members are eligible to enter the Raffle, but you must be present to win.
Click on image to see the Lockheed P-38 Lightning in action:
WHEN: Saturday, March 7, 2020, 10am–12 noon: Speaker program & flight demonstration. Museum doors open at 9:00am.
WHERE: Planes of Fame Air Museum, 14998 Cal Aero Drive, Chino, CA 91710-9085

Click here to get a coupon for $2.00 off one adult admission for this event! (when available) 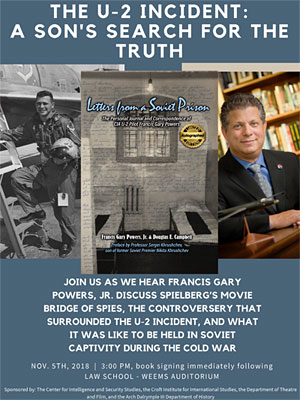 Presentation by:  Francis Gary Powers, Jr. is the son of Francis Gary Powers (an American pilot whose Central Intelligence Agency (CIA) U-2 spy plane was shot down while flying a reconnaissance mission over the Soviet Union in 1962, causing the famed U-2 incident). During Francis Gary Powers Jr's 1- hour presentation, he will discuss the Cold War, U-2 Incident, the controversy that surrounded his father, what the family has done to set the record straight, and consulting for the Steven Spielberg's 2015 movie Bridge of Spies that portrays Gary's father's exchange for Soviet spy Rudolph Abel in 1962. Gary will be selling and signing books at the event.
Gary is the Founder and Chairman Emeritus of The Cold War Museum, a 501(c)(3) charity located at Vint Hill, VA 45 minutes west of Washington, DC. He founded the museum in 1996 to honor Cold War veterans, preserve Cold War history, and educate future generations about this time period. As Chairman of the Presidential Advisory Committee for the Cold War Theme Study he works with the National Park Service and leading Cold War experts to identify historic Cold War sites for commemorating, interpreting, and preservation. Recently, he consulted for a Steven Spielberg Cold War thriller, Bridge of Spies, about James Donovan who brokered the 1962 spy exchange between KGB spy Rudolph Abel and CIA U-2 pilot Francis Gary Powers, Sr. 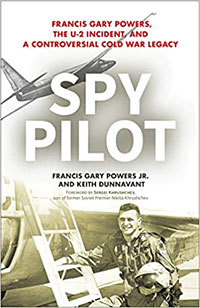 Gary is the author of Letters from a Soviet Prison (2017) and Spy Pilot (2019) which both help to dispel the misinformation surrounding the U-2 Incident. He is a Board Member of the Strategic Air Command and Aerospace Museum near Omaha, NE and an Honorary Board Member of the International Spy Museum in Washington, DC. Because of his efforts to honor Cold War veterans the Junior Chamber of Commerce selected him as one of the “Ten Outstanding Young Americans” for 2002. Gary lectures internationally and appears regularly on C-SPAN, the History, Discovery, and A&E Channels.

Join us for The 3rd annual Planes of Fame Volunteer Maloney Model Contest. Held during this March 7th Living History Flying Day Event. The public is invited to judge the model entries in order to select the winners. The Ed Maloney Trophy for 2020 will be awarded to the top modeler. 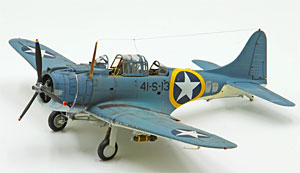