February’s Hangar Talk and Flying Demo promise some engaging topics and a chance to see a World War Two combat veteran take to the skies!

Doors to the Museum will open at 9:00am.  Regular admission prices are in effect and Museum Members always get in free!

This month, Hangar Talk continues with the next installments of two of our ongoing series stories and we take a fascinating look at a major breakthrough of the 1930s that paved the way for the incredibly powerful engines of the 1940s.  Plus, Ted Mount will focus TED Talk on one of the world’s most colorful aviators from the Golden Age, a man who redefined perseverance in the face of mounting obstacles.

Our Flying Demo features one of the true heroes of World War II – the Curtiss P-40 “Warhawk.”

The Saturday, February 4, 2023 event has all the makings of a great day. 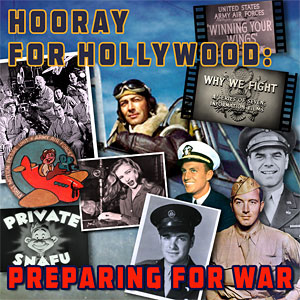 In early 1939, as the world moved closer to the brink of war, the U.S. Government and the Hollywood community began a collaboration that would span the next four years of fighting.  The Museum’s Brian Finnegan will continue his series on Hollywood during WWII with a look at the role of recruitment films used to build-up the Armed Forces, training films to teach the men how to fight, and orientation films that explained the “why” of war.  We’ll also look at several film stars and their real-life roles as training instructors.

From the early days of aviation, the idea of more powerful engines translated into the ability to fly higher, farther, and faster.  But at some point, the advancement of super powerful engines stalled – primarily due to the limitations of the fuel they needed to run.  Ken Saltgaver of the Museum will look at the challenges of the 1920s and 1930s that led to the development of refining improvements and more stable aviation fuels.  Ken will show us how this opened the door for engines only imagined a decade earlier. 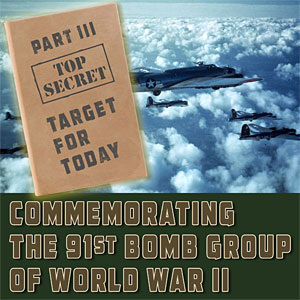 Jim Llano of the Museum continues his series on the 91st Bomb Group – Heavy during World War II with a presentation entitled, “Target for Today.”  Jim will explore how the Army Air Force in Europe selected targets for the heavy bombers and what went into planning a bombing mission.  He’ll also take a look at some of the principle and most dangerous missions flown by the 91st Bomb Group during the conflict. 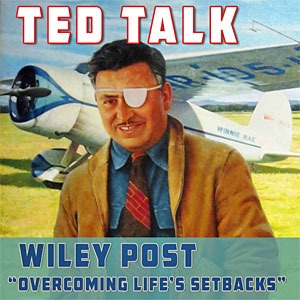 Our TED Talk for this month will feature Ted’s inspirational look at one of aviation’s most colorful personalities – Wiley Post.  The first pilot to fly solo around the world, Post also made advancements in science with his discovery of the jet stream and his work on high-altitude pressure suits.  But Ted will go beyond the accomplishments to show us a man who, when faced with one serious setback after another, persevered to overcome them and succeed. 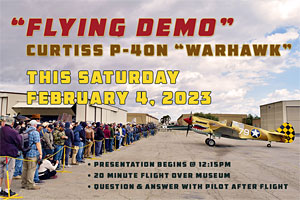 It is still to this day one of the most easily recognized warbirds from the Second World War era.  It flew in every combat theater of the war, and served the United States and her allies in aerial combat, bombing, and ground support missions.  While never the fastest aircraft in the skies nor the most agile, it nevertheless proved reliable, dependable, and deadly.

The Museum’s P-40N “Warhawk” is a combat veteran of WWII, having flown with the Royal Canadian Air Force during the conflict.

The Flying Demo will begin at 12:15pm and feature a brief presentation by Ken Saltgaver of the Museum followed by engine-start directly in front of the crowd.  The aircraft will taxi away and we’ll conduct our “Members Only Raffle” which will feature a free flight in the Museum’s Vultee BT-13B “Valiant.”

We’ll then thrill to the sights of the P-40 flying over the Museum for twenty minutes and upon its return, guests will be able to ask questions of the “Warhawk’s” pilot.

In addition to all of the above, we’ll have food trucks on hand, our Museum Guides will tell you the stories of the Museum and its world-renowned collection, and our B-17 will be open for visitors to tour the inside.  A great way to spend the day at Planes of Fame!